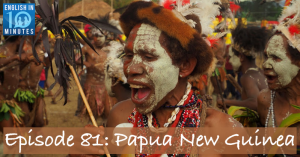 Our guest Joanna talks about her experiences living and working in Papua New Guinea. She discusses PNG’s languages, culture and love for her favourite sport, rugby league. The episode comes with a worksheet containing a transcript of the conversation, analysis of the best vocabulary, and discussion questions to help you make the most of the conversation.

Read the transcript of the conversation, see key words and phrases highlighted and answer comprehension and discussion questions in the free worksheet!

In the episode, Joanna mentioned that she was making a documentary film about Papua New Guinea’s women’s rugby league team. The film, which is called Power Meri, is now finished and you can watch the trailer below! Also, read this article about the film and PNG written by Joanna for The Telegraph newspaper: How rugby league improved ‘one of the worst places in the world to be a woman’