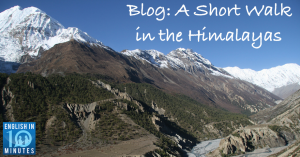 In episode 49 of the podcast, Nick and Wendy talked about trekking in Nepal, specifically walking the Annapurna Circuit and Sanctuary treks in the Himalayas. In this blog post (originally published on 31 October 2008), Nick wrote about the experience after they had finished walking.

The whole point1 of coming to Nepal and the basis of this entire trip to the subcontinent was to walk the Annapurna Circuit in the Himalayas during the best month for weather and visibility. Twenty-four days later, Wendy and I can look back at this trek as one of the best things we’ve ever done together. Now, back in Kathmandu, it feels a bit weird to be in civilisation again. When you’re not waking up before 6am each morning and starting walking straight away to see first light on an 7500m peak – well, life just isn’t the same. 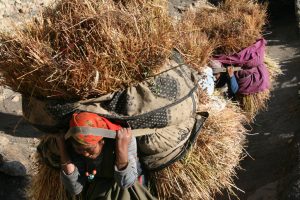 Nepalese women carrying loads through the village of Jharkot on the Annapurna Circuit, Nepal.

How do you start describing a 300km, two-and-a-half week walk through rice fields and pine forests, past endless numbers of streams and waterfalls, through Hindu villages and ancient Tibetan Buddhist ones, past hundreds of goats trying to cross a bridge at once and dozens of yaks grazing in the shadows of snow-capped mountains, seeing five 7000m+ peaks with one tilt2 of the head (with the sky such a deep blue that it’s almost black) and crossing one of the highest passes in the world, 4700m higher than you were when you started walking? Like that, I suppose.

The Annapurna Circuit is all that and more, a wonderful journey that changes every day and offers effortless mountain views and beautiful villages, sometimes mixed together in outrageously beautiful scenes that will stay with me forever.

I might not have thought so after the first few days, when the going was tough3, we were too low to see any mountains and it rained each afternoon, drenching us4 en route5 to Tal in the afternoon of day three. But by day five we saw our first snow-capped peak – Lamjung Himal (6932m) – and from then on the mornings were clear, the rain stopped, and the views and villages got better and better as each day passed. 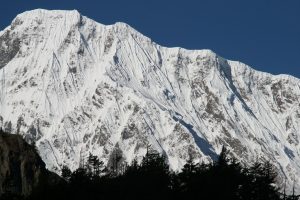 The peak of Annapurna III (7555m) on the Annapurna Circuit, Nepal.

The scenery around the Braga area – with views of Annapurna II (7939m), Annapurna IV (7525m), Annapurna III (7555m), my favourite, as we trekked to its snow line and a glacier beneath it on our ‘rest day’, Gangapurna (7454m) and Tilicho (7134m) – was superb and this was the most enjoyable part of the Circuit. We could see yaks and Annapurna II and IV out of our lodge window in Braga, the village itself was picturesque with a historic gompa (Tibetan monastery), and the food was heavenly after a week of identical, limited menus at the other lodges en route. 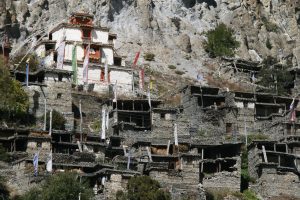 The village of Braga and its Gompa (Tibetan Monastery) on the Annapurna Circuit, Nepal.

By the 10th day, most of these mountains had disappeared from view (though some new ones had appeared) and we were focusing on our ascent to the Thorong La, which at 5416m is one of the highest passes in the world – essentially making it about as high as you can ever go without climbing a mountain or hopping in an airplane. Our first attempt at the 1000m ascent to the Thorong La from Thorong Phedi on Day 11 didn’t go so well – I had trouble breathing at such a high altitude and we turned back after only 45 minutes. After an extra day of acclimatisation, we set out again at 4am the following morning in light snow, made it all the way to the freezing pass, and then – rather wastefully, it somehow seemed – started walking down the other side all the way to Jarkhot at 3650m, giving back three days’ worth of ascent in little more than three hours. I didn’t dwell on it6 long though, as Jharkot, with its ruined fortress towers, picturesque old residential architecture, and Buddhist monks playing trumpets on the roof of our guesthouse, was my favourite village of the entire trek. 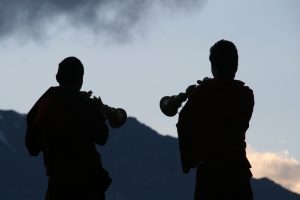 Buddhist monks playing trumpets on a Jharkot rooftop while looking at the Himalayas – the Annapurna Circuit, Nepal.

These days, a jeep road extends all the way to Muktinath (the last town before the pass, from the other direction), which made the next three days not nearly as pleasant, walking-wise, as they had been on the other side of the Thorong La. Luckily, villages like Kagbeni with its old fortress and Marpha, the ‘delightful apple capital of Nepal’, according to the welcome sign, made up for it. In Marpha, we stayed at a tiny lodge with a local family and ate home-made apple pancakes and apple pie and drank home-made apple cider.

After going all the way back down to Tatopani at 1190m, we left the jeep road and started ascending up stone stairs (a sign of things to come), reaching Ghorapani and the overrated Poon Hill lookout by Day 18. From there we could have made it back to the city of Pokhara in one day, but instead we took another path and kept trekking.

The Annapurna Sanctuary walk to the base camp of Annapurna 1 took us six extra nights after we joined the path from the Annapurna Circuit. This was a more difficult trek as much of it was either up or down on stone steps, and you would often have to ascend and descend significantly to get from one destination to another even if they were at the same altitude. Once you leave Chomrong at 2170m, there are no more permanent settlements – just trekking lodges – so the village life we enjoyed on the Circuit was absent. Also, the walk at this point is essentially in a gorge which robs you of the views that are so abundant on the Circuit. In this mood, with rain pouring down outside our lodge at Deurali the day before our ascent to base camp (the first rain since the early days of the Circuit), we agreed on how much more we liked the Circuit; how the Circuit was about the journey and was so enjoyable and rewarding every step of the way, while the Sanctuary path wasn’t that fun and it was only about the destination. 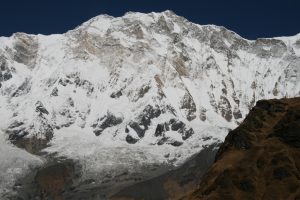 Annapurna I (8091m), seen from the base camp of the 1970 expedition to climb the mountain.

What a destination it was! The walk from Machhapuchhre base camp (3700m) to Annapurna base camp (4130m), partially on snow on a cloudless morning with incredible mountains revealing themselves more and more with every step, was the best walk of the trek. After a three-day absence, Annapurna I dramatically revealed itself, and the 360-degree panorama of snow-capped peaks that awaited us at Annapurna base camp was by far the most amazing view of either trek and rivalled, perhaps surpassing7, the view of Rakaposhi and its glacier in Pakistan as the most impressive natural sight I have ever seen [editor’s note: this was written before we went to Antarctica!]. We were, quite literally, surrounded by an amphitheatre of snow that included Annapurna I (8091m) and Annapurna South (7219m) to the west, Machhapuchhre (6993m) and Gandharba Chuli (6248m) to the east, the opposite side of Annapurna III (7555m) to the north and a series of smaller peaks in all directions – the grand culmination8 of more than three weeks of trekking.

We stayed the night at the base camp, took in the breathtaking Himalayas one more time the next morning, and then began the long hike out of the sanctuary, taking three days to get to Pokhara and the end of our 24-day trek.