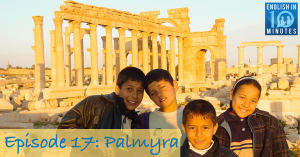 Nick and Wendy reminisce about their visit to Palmyra before the Syrian civil war. They talk about the spectacular Roman ruins and the tragedy of what has happened in Palmyra and in Syria because of the war. The episode comes with a worksheet containing a transcript of the conversation, analysis of the best vocabulary, and discussion questions to help you make the most of the conversation.

Make the most of the conversation by downloading the free worksheet!

Isis destroys tetrapylon monument in Palmyra
Just two weeks after our episode on Palmyra was released, it was reported that ISIS, which retook the city in December 2016, had destroyed the tetrapylon and badly damaged the Roman theatre at Palmyra. This article in the Guardian summarises the situation and is accompanied by aerial photos which show Palmyra ‘before and after’.