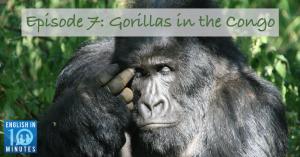 Nick and Wendy were lucky enough to see wild mountain gorillas in the Congo several years ago. In this episode they talk about this incredible experience and the impact it had on them. The episode comes with a worksheet containing a transcript of the conversation, analysis of the best vocabulary, and discussion questions to help you go even further.

Make the most of the conversation by downloading the free worksheet!

Grand Opening of the Ranger Widows Sewing Workshop
An article about something Wendy mentioned in the episode: a new project to help the wives of dead Virunga rangers make a living through sewing.

Virunga Ranger Killed Defending the Park
An article from September 2016 reporting that a ranger was killed by rebels. This confirms that what Nick talked about in the episode is still true: that being a ranger protecting gorillas in African jungles is a very dangerous and courageous job.

Gorilla in the Congo
A photo of one of the gorillas that was executed in Virunga in 2007 is in TIME’s 100 Most Influential Images of All Time.